Is the safety rating of a Volvo always better than a Subaru safety rating? Which is safer, a Volvo XC90 SUV or the Subaru Outback SUV?

How to Compare Volvo to Subaru Safety Rating

Volvo cars have been historically considered “some of the safest cars.” But that reputation was earned when it was a Swedish company. Today Volvo is owned by the Chinese Zhejiang Geely Holding Group. So, it seems reasonable to ask, are Volvo’s still the safest cars?

We decided to answer this question by comparing the Auto Grades of another company that markets its cars using the safety banner, Subaru.

While we invite our site visitors to explore all the different models of these companies, we do a single side-by-side comparison for the midsize SUV’s Volvo XC90 and the Subaru Outback.

Overall, the Subaru Outback gets a slightly higher Auto Grade. 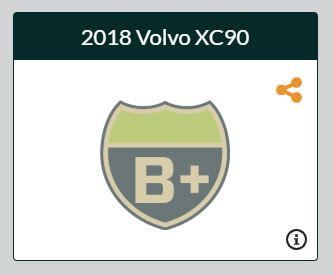 Plus, because the Outback is more popular and we have more data, we were able to give personal Auto Grades. Because the Volvo XC90 is less popular, we do not have enough data to give it personal Auto Grades. See Auto Grades Explained more information on where these safety ratings come from. Also check out our earlier SUV comparison article for more on the Honor Roll.

Where are Volvos made?

Volvo Car Corporation is a Swedish vehicle brand currently owned by the Chinese auto company Geely. It is headquartered in Sweden and still makes cars there. However, like most automakers, they have manufacturing and assembly plants all over the world to serve different markets. Sweden, Canada, Belgium, Malaysia, Netherlands, Thailand, China and the United States all have Volvo locations.

What is Volvo City Safety?

City Safety by Volvo is a crash prevention system that is standard, starting with the XC90 in 2014. It involves a suite of braking capabilities that assist drivers in preventing or reducing the seriousness of crashes. The idea is to help prevent common accident scenarios, such as turning at intersections into oncoming traffic, as well as cyclist and pedestrian detection and braking.

Where is Subaru from?

Subaru is the car manufacturing division of Japanese transportation company, Fuji Heavy Industries. They continue manufacturing in Japan and added a plant in Indiana to supply North American markets.

How safe are Subarus?

Our safety ratings give the Subaru Outback an Auto Grade of A. This safety rating is based on the actual experiences of drivers on roadways in the worst crashes. The Outback offers top tier protection. We consider it among the safest SUVs.

We’re going to have to answer that with a question, “Safer than what?” The purpose of Auto Grades is to be able to easily make comparisons between car makes, models, and years. Try the free Auto Grade search tool for the safety rating of the specific Volvo you have in mind. Be sure to personalize the Auto Grade for your own gender and age. Then, compare that grade to any other model you choose. The Auto Grades are based on real-life crash data and are designed to be easy to understand.

With an Overall Auto Grade of B+, the Volvo XC90 is still among the safer cars, according to our analysis. And, the reputation for safety by Volvo is well earned. Today, we take these safety devices for granted. But in the 1990’s and 2000’s, some of these could only be found on the more affordable Volvo models.

For example, a sound to remind you to buckle up was implemented by Volvo in the early 1970’s, side impact protection system in 1991 in 850, 940 and 960 models, and roof mounted inflatable curtain side airbags on the S80 in 1998. Long before electronic stability control was required in 2012, the XC90 had this rollover prevention system on its 2002 model.

However, the original culture of safety associated with Volvo may have been disrupted when it stopped being a Swedish company in 1999. Ford bought Volvo in 1999, though it was only held for about 10 years.  In 2010 the Chinese Zhejiang Geely Holding Group bought Volvo. The Auto Grade for the 2018 Volvo midsize sport utility vehicle XC90 is the rating for this Chinese car.